The well-kept secrets of Hessel Studios


“You'd have to be pretty dumb to want to copy us.” -Gregg Hessel
(That's not the reason, though.) 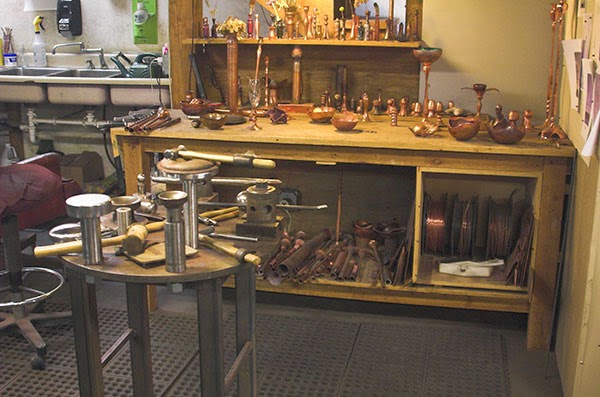 Gregg Hessel has kept his technique something of a secret over the years. This may have been unnecessary.

“More than half of our stuff, we've made our own tooling for because there's no industry to supply us,” Gregg said. “There's very little that we can buy.”

Their process is a combination of blacksmithing and silversmithing. Copper doesn't fire-stain like silver when it's heated, so they forge the copper hot with power hammers and finish hammer it cold. “Instead of just silversmithing we've added the blacksmithing techniques, on tubing rather than flat stock,” he explained.

Since blacksmiths only need big hammers, there was nowhere to buy the smaller hammers suitable for copper. So they made their own power hammers ranging from three to 30 pounds. Gregg says they have over a hundred little hammers around the studio, as well as torches, anvils and a hundred year old foot press Gregg uses to finish the pieces off.

“I'm just waking up to the shapes I own,” Gregg said of his hammers. “Each shape has to match the place you're trying to hammer.  All our pieces are hammered completely top to bottom four times. Every piece has four layers of hammer marks.”

Hessel Studios also had to create many of their own silversmithing tools, since these tools are no longer available. “Silversmithing basically never resurrected after the depression,” Gregg said. “Metalsmithing came back but, other than jewelry, silversmithing never came back.”

Because what he does is unique, Gregg has started teaching. “One of the things I want to do is leave enough of the technique out in the world so when we stop doing it, there's something left behind. Sort of a legacy.”

While he's teaching one technique, he's been busy inventing another. And it's fascinating.

“For the last few years we dropped out of sales to update our skills. We let go of the employes so I had time to focus on building the technique.”

It's actually a new series of techniques, involving tube spinning on a lathe. “I haven't known anyone who's doing that. It's kind of secret,” he admits. “It's so easy to do, it's remarkable no one's figured it out. It's roughly the same technique as the laboratory glass industry, but we're doing it in copper. I can do on a metal lathe with copper what you can do on a wood lathe with wood.”

Some of the new pieces will be available in the spring. “We're doing small vases, and possibly moving into lighting next year. We'll still do the [current] pieces, but over the next year we will phase out a third of the line and replace it with new pieces. We'll trim out some of the old look and bring in the new.”

(Yes, some of us here are panic-buying our favorite designs.)

In the meantime he's happy to be passing along his knowledge – not for people to copy their style, but so they can start working the technique.